Which is the America’s most lethal animal? 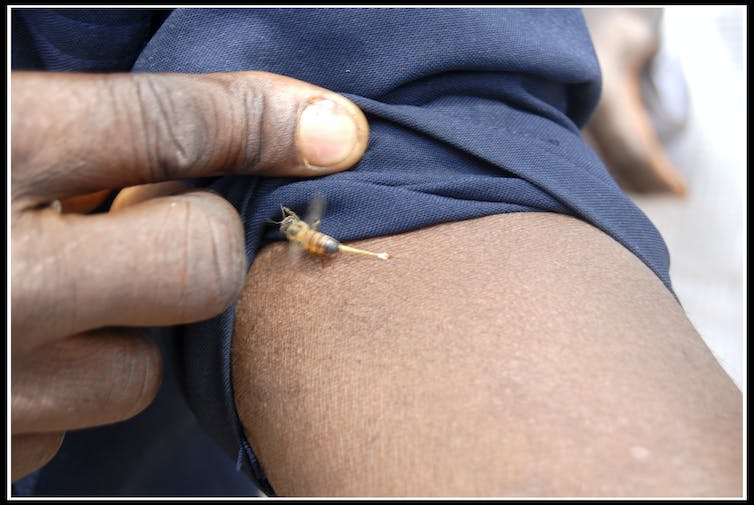 Animal attacks have been in the news a lot. Late last year, a 22-year-old student in New Jersey was killed by a black bear he had been photographing. This summer, swimmers off the coast of North Carolina have suffered a record number of shark attacks, several of which resulted in amputations. And early in July, a 28-year-old Texas swimmer who ignored warning signs was killed by an alligator.

Of course, not all human-killing animals are so large. Each year, dozens of Americans die due to bites by venomous snakes, lizards and spiders. Other small animals such as ticks and fleas, though not naturally outfitted with their own lethal weaponry, can nonetheless kill by transmitting deadly infections, such as Powassan virus.

Worldwide, the animal responsible for by far the greatest number of human deaths is just such an insect that transmits a deadly infection: the mosquito. The World Health Organization estimates that over 600,000 people die each year after being bitten by mosquitoes bearing the deadly malaria parasite. Happily, however, deaths from mosquito-borne diseases are much rarer in the US.

Operating with a biologist’s definition of an animal – an organism with specialized sense organs that responds rapidly to stimuli – one creature has proved to be far more lethal to Americans than all other animal species combined: human beings. Each year in the US, the Centers for Disease Control counts over 16,000 homicides and over 41,000 deaths from suicide and self-inflicted injury.

Yet among nonhuman animals, the creatures that cause more American deaths than any other are bees and wasps. In a typical year, nearly 100 American deaths are caused by bee stings. In fact, this number probably represents an underestimate, since some bee sting deaths are erroneously attributed to heart attacks, sun stroke and other causes.

The impacts of bee stings can differ widely. Two weeks ago, a five-year-old girl attending a birthday party in my backyard was stung three times, leading to tears but no permanent damage. Last week, an acquaintance of mine from work, a man in his 50’s with a known allergy to bee stings, lost his life after being stung by a bee.

To the vast majority of people, a bee sting is not life-threatening. Experts say that the average adult can safely withstand more than 1,000 bee stings. Of course, fewer stings could prove dangerous to an infant or small child. What makes stings deadly is generally not the toxicity of bee venom itself but an allergy developed as a result of prior stings.

It is estimated that about two million Americans have allergies to insect stings. Signs of a severe allergic reaction include difficulty breathing, hives, swelling of the face, throat, or mouth, anxiety, rapid pulse, and a drop in blood pressure. Death can result in as little as 10 minutes. Individuals with severe allergies are often advised to carry injectable epinephrine (commonly called an EpiPen), to be administered immediately after a sting.

Anyone who has ever been stung knows how painful it can be. The pain is due primarily to a component of bee venom known as melittin, a small protein that interferes with the normal function of cell membranes. Another component of bee venom, histamine, can cause the affected area to become swollen, red, warm and itchy.

Some have speculated that melittin may someday be used for therapeutic purposes. For example, it inhibits the bacterium that causes Lyme disease and can suppress the infectious agents involved in a number of sexually transmitted diseases. For the moment, however, most human encounters with melittin are strictly painful.

Some bees cannot sting. Male bees, for example, do not have stingers, which makes sense when you know that a bee’s stinger is in fact a modified form of an organ insects use to deposit eggs. And in most situations, bees are unlikely to attack. Generally they do so only when provoked, such as when a lawn mower disturbs a hive.

One reason bees are disinclined to sting is the fact that, at least among honey bees, doing so often kills the bee. Their stingers are barbed, and the deeper then penetrate into the skin, the more likely they are to become lodged there. When the bee pulls away, it tears away part of its abdomen, typically causing death within minutes.

On the other hand, when the hive is threatened, bees may launch what appears to be a coordinated attack. This is facilitated by the release of alarm pheromones, which attract other bees to the location. Once such an attack commences, they may continue to sting until the offender has left the scene or died.

A routine bee sting requires no specific treatment, although there are a number of approaches that can provide symptom relief. The first order of business is to remove the stinger, in order to limit the amount of venom received. The best way to do this is by scraping it off with a fingernail. Squeezing the sac will only inject more venom.

Generally speaking, it is a good idea to wash the affected area with soap and water. If the hand is involved, rings should be removed prior to the development of swelling. Swelling can be reduced with an icepack and over-the-counter antihistamines, which can also help with itching. Medications such as aspirin or ibuprofen can relieve pain, though it is important to heed their warning labels.

Though bees take the crown as America’s most lethal animal, they are not naturally aggressive creatures, and when they attack, they do so in defense against a perceived threat. The key to avoiding bee stings is to steer clear of hives and nests, operate motorized equipment such as lawnmowers with care and avoid swatting at them when they are in the vicinity.

You’re eating microplastics in ways you...