New treatment in the works for disfiguring skin disease, vitiligo 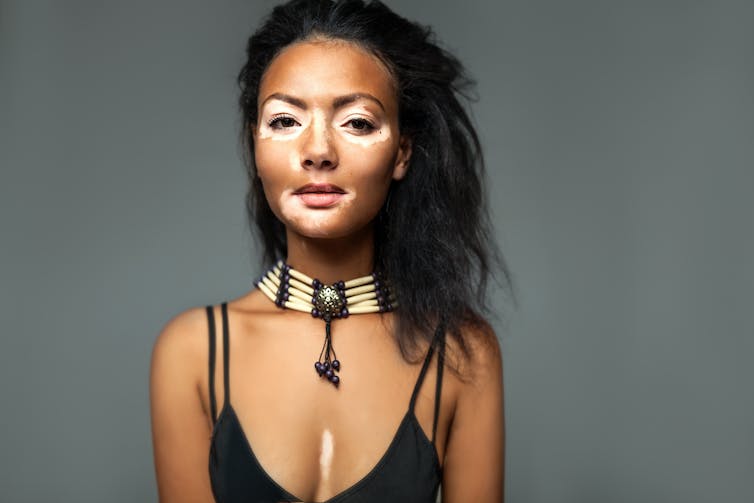 This African woman suffers from an autoimmune disease called vitiligo which causes the loss of skin pigment. By andreonegin/shutterstock.com

In many parts of the world there is great shame and stigma tied to vitiligo, an autoimmune disease of the skin that causes disfiguring white spots, which can appear anywhere on the body. In some societies, individuals with vitiligo, and even their family members, are shunned and excluded from arranged marriages. The rejection is so crippling that one person suffering from the disease even requested an amputation of his forearm affected by vitiligo because he could marry with only one arm, but could not with vitiligo.

I am a physician-scientist and director of the Vitiligo Clinic and Research Center at the University of Massachusetts Medical School and I’ve witnessed my patients’ suffering and depression. Some are so ashamed of how they look; they refuse to leave their homes in daylight, they quit their jobs, and they lose relationships. Some of those afflicted with vitiligo have committed suicide.

I began studying vitiligo in 2008 because this devastating condition affects about one percent of all people – over 75 million worldwide – and patients deserve better treatments. In a recent report published in Science Translational Medicine we describe a new therapy that is showing particular promise in mice with this disease.

Your skin has a memory

Existing treatments such as topical steroids and light therapy, which are used “off-label” because they have not been FDA-approved to treat vitiligo, can be effective for patients. These treatments reverse the disease by stimulating brown spots to appear around hair follicles within the affected white patches of skin. As these brown spots increase in number and size they merge until the white patch is replaced with normal skin color.

This takes between one and two years, depending on the location of the body being treated. However, in most cases the white spots reappear at the same location, often within just one year after stopping the treatments. This recurrence can be just as devastating as when the white patches first appeared.

We wanted to find out why these spots reappear. Our research team suspected that “memory” forms within the skin when the white spots first appear, so that the spots “know” where to return when treatments are stopped. Working separately, we and three other laboratories led by Liv Eidsmo, Mary Jo Turk, and Julien Seneschal searched for the source of this memory in the skin.

These three other labs first found cells in vitiligo skin from mice or humans that looked a lot like the memory cells that protect the skin from a second exposure to a viral infection, suggesting that the body “thinks” it is fighting a viral infection when it “misfires” at the patient’s normal cells, killing the pigment-producing cells in the skin called melanocytes and causing vitiligo. These cells are called “resident memory T cells.”

Because immune responses to a virus act in a similar way to immune responses that cause autoimmune diseases, it seemed reasonable that these cells might also be the source of this remaining disease memory in the skin.

Disease memory can be erased with new treatment

We used a technique called skin blistering to isolate skin and skin fluid directly from the spots of my vitiligo patients and isolate the disease-causing memory cells so we could analyze them more closely. Similar to the other labs, we also found the virus-like memory cells, and we were able to also determine that these cells specifically targeted the melanocytes. We hypothesized that if we could remove these memory cells from the skin using a new treatment, then treatments to repigment the skin would be long-lasting and possibly permanent.

We then tested our hypothesis on mice we specifically engineered to develop vitiligo. Like humans, mice also have memory T-cells so we looked for their “Achilles heel” to see if we could knock them out without harming other cells. Our team figured out that the vitiligo-causing memory cells require a special protein called “IL-15” to survive. We injected the vitiligo mice with an antibody that blocks the IL-15 protein from interacting with the memory cells.

After just a few weeks we discovered that the treatment wiped out the memory cells from the mouse skin, allowing the brown pigment to return in a spotty pattern, just as we see in patients who respond to therapy. Importantly, just two weeks of antibody treatments caused repigmentation that lasted for months, suggesting this strategy, unlike existing treatments, might provide long-term benefit for vitiligo patients.

During our study we also found that the vitiligo-causing memory T-cells in both mouse and human skin seem to require IL-15 more than other types of T cells – which means they are more sensitive to levels of this protein. This is important because it means we might be able to selectively remove the vitiligo-causing cells without harming other important immune cells too. In the treated mice, the vitiligo-causing cells became undetectable, but the other T-cells responsible for fighting infection remained unharmed and present, suggesting that our antibody therapy might be safer for the immune system than first thought.

Based on these results, we are working with the National Institutes of Health-funded Immune Tolerance Network (ITN) to develop a clinical trial to test this antibody treatment in human patients. We are hopeful that we can begin recruiting patients next summer.

Although this antibody drug has only been proven to work in mice with vitiligo, we are excited to test it in humans because it could represent a significant advance over existing treatments. The partnership with the ITN will allow us not only to test whether it works for vitiligo patients, but also how it works. This will help us know when and in whom to use this new therapy.

This article was originally published on The Conversation. Read the original article.

This RNA Responsible For Fat Deposition In Your...